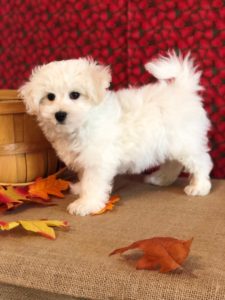 The Bichon Frise, like his cousin the Caniche, descended from the Barbet or Water Spaniel, from which came the name “Barbichon”, later contracted to “Bichon”. The B

ichons were divided into four categories: the Bichon Maltais, the Bichon Bolognais, the Bichon Havanais and the Bichon Teneriffe. All originated in the Mediterranean area. Appreciated for their dispositions, the dogs traveled much through antiquity. Frequently offered as items of barter, they were transported by sailors from continent to continent. The dogs found early success in Spain and it is generally felt that Spanish seamen introduced the breed to the Canary Island of Teneriffe. Most sources agree that in this period the name “Teneriffe” was retained mainly because of its slightly exotic nature and the enhanced commercial value the name gave the common Bichon. In the 1300′s, Italian sailors rediscovered the little dogs on their voyages and are credited with returning them to the Continent, where they became great favorites with Italian nobility, and as with other dogs of that era, were often cut “lion style”. The “Teneriffe” or “Bichon” made its appearance in France under Francis I, the patron of the Renaissance (1515-1547). However, its greatest success was in the court of Henry III (1574-1547), where it was pampered, perfumed, and beribboned. The breed also enjoyed considerable success in Spain as a favorite of the Infantas, and painters of the Spanish school often included them in their works. One finds such a dog in several of the paintings of Goya. After a brief renewal of interest under Napoleon III, the fate of this aristocratic dog took a new turn. In the late 1800′s, it became the “common dog”, running the streets, accompanying the organ grinders of Barbary, leading the blind and doing tricks in circuses and fairs. At the end of World War I, a few fanciers recognized the potential of the dogs and in France four breeders began establishing their lines through controlled breeding programs. On March 5,1933, the official standard of the breed (as written by the then President of the Toy Club of France, in conjunction with the Friends of the Belgian Breeds) was adopted by the Societe Centrale Canine of France. As the breed was known by two names, “Teneriffe” and “Bichon”, the president of the International Canine Federation, Madame Nizet deLeemans, proposed a name based on the characteristics that the dogs presented and the name “Bichon Frise” (plural: Bichon Frises) was adopted. “Frise” refers to the dog’s soft, curly hair. On October 18, 1934, the Bichon was admitted to the stud book of the French Kennel Club. The International Canine Federation recognizes the Bichon Frise as “a French-Belgian breed having the right to registration in the Book of Origins from all countries”. The breed is recognized in France, Belgium and Italy.

In 1956, Mr. and Mrs. Francois Picault moved to the United States and settled in the Midwest where Etoile de Steren Vor whelped the first Bichon litter born in this country (sired by Eddie White de Steren Vor). In 1959 and 1960, two breeders in different parts of the United States acquired Bichons, thus providing the origins for breed development in this country. Accepted for entry in the Miscellaneous Class, September 1, 1971, the Bichon Frise was admitted to registration in the American Kennel Club Stud Book in October, 1972, and to regular show classification in the Non-Sporting Group at AKC shows April 4, 1973.